My Time at the coastal paradise of Taiwan

Having been placed in the middle of the ocean, Taiwan’s culture- although diverse, still mostly leans towards conservative and traditional. The preservation of its history seen through every nook and cranny of the island is one of the reasons that compelled me to go back the second time around. The view of the coast, the distinct taste of its local food, and everything in between.

There are a lot of interesting places to visit in Taiwan and our first stop was Taipei 101. The Taipei 101 is a super skyscraper in Taipei's commercial center that functions as a modern technological hub, a tourist attraction, and an office structure all at the same time. Standing at the observation deck, the scenery of minuscule modern buildings was a great contrast to the rest of Taiwan’s ancient structures. Other than the view on top, we also explored its mall and the marketplace houses a wide variety of goods-from designer products to different types of cuisine. Outside the mall, we stumbled into a few thrift stands and it mostly displayed winter clothes which were understandable given the cold weather.

Then we went to the Jiefun old street which was just teeming with life- so many people, so many products, and so many sights to see. It was overwhelming, but it was overwhelmingly good. This was actually the place that the award-winning Studio Ghibli movie spirited away was based on and the real thing is every bit as whimsical as it is on screen- or maybe even more. The food stalls were in no way subtle and attracted all sorts of tourists. The historic lanes of Jiufen are lined with tea houses and coffee shops that offer breathtaking views of the tranquil mountaintop village and Keelung Harbor, and to complete the look, it is decorated with the iconic red lanterns. 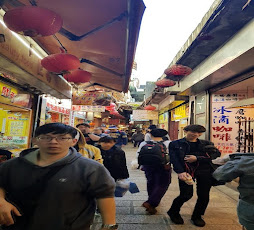 The township's name originated from a somewhat peculiar story: There were only nine households living in the area a long time ago. Goods could only be carried by ship because there were no roads connecting it to the rest of the world. Families used to reserve nine pieces of household products to be delivered at once due to the inefficiency of delivery to the region. As a result, the name Jiufen, which means "Nine Portions," stuck.

Here’s a little travel hack for you, among the abundance of treats and souvenirs, don’t miss out on their taro balls.

The Shifen is pretty much the same but with its own charm as well as it is nestled in an old railway town. It was originally intended to transport coal but is now one of the most popular on the Pingxi rail line. My partner and I lighted a lantern ourselves, and it’s one of our memorable experiences in Taiwan. 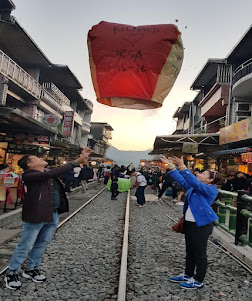 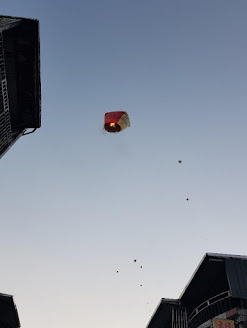 For anyone who is looking for cheap hotels in Taiwan, because honestly, who wants to burn a hole in their pocket when there’s an option not to, there’s KDM Hotel and Longshan Inn.